iTips & Tricks, Opinions and Reviews of happenings in the World of Technology...

After disconnecting you with your friends (Friends connect) last year with one ruthless Wave, Google is ready to gobble up your RSS feeds Reader. When you try to log on to Google reader, you get a message which says Google Reader will not be available after July 1, 2013, and learn more redirects you to: 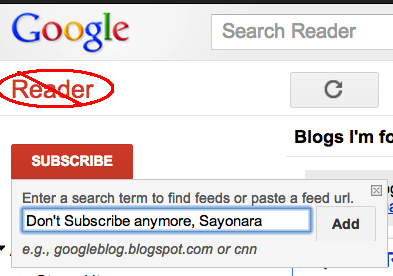 Although some might claim that Google does give you enough time before the actual extermination, one is still left with a void after being habitual of using a product for years at stretch.

What's worse is, even if you were not using Google Reader directly, there are so many RSS readers which have been providing you Google Reader Sync, and so you will probably require some export/import task if you are into RSS feed notifications.

The other side of stage is more ruined - the publishers who have been enjoying a huge number of followers and amazing readership via Google reader, will have to just swallow the loss of non-returning followers with a bitter taste. (check link below)

Why the followers won't come back?

The followers who are too much of tech junkies, and have taken immense pain and were driven by the trust for sound brand name's good will of tech giant Google, and were pretty happy and satisfied with a small number of feeds with Google Reader sending them notifications, would be first ones who won't be coming back. Adding there names to the list would be those who would be too lazy to add all their old favourites - including just a selected few, leaving the others for later and forgetting them altogether. Then there would be those who are not so aware - who won't be 'buzzed' until its too late.

The link below also specifies why Google Reader's execution might not be a oh-so-smart step even though there might be relatively small group of people using it when compared to other RSS feed readers.

What if Google Readers just don't come back?

Hell, No commitment for free products!

Technically, the terms and conditions of these free products, like soon to expire Google reader, clearly specify that they are mere mortals whose existence is controlled by the creator. But still, the users placed their trust in Google when selecting it and using it through years. Looks like using free products is not very smart move in long run. Or it might be, if you don't mind hopping to another free alternative in some time.